St Nicholas’ Church is located on the South side of East Grafton village green.

The lych gate provides a welcome entrance to the wide church yard which contains a large number of graves and some statuesque trees.

Grafton Parochial Church Council is responsible for the upkeep and running of the church. 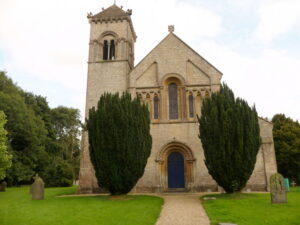 In the nineteenth century an enlightened and energetic vicar, John Ward, fought a long campaign to give Grafton its own church.  He persuaded the Marquess of Ailesbury, who owned the land around, to give enough ground for a church, a parsonage and a school.

The church was completed in 1844. It is built of Bath stone, in the Romanesque or neo-Norman style, with an apse and a campanile, rather like a smaller edition of Wilton church near Salisbury.

The apse is the most distinctive feature of our church, and its decoration is the work of Willement, famous for his church interiors.

The story behind St Nicholas

Nicholas was a fourth century bishop of Myra in Asia Minor (southern Turkey). His reputation as a worker of wonders was enhanced by a ninth century author of his hagiography and he is now best known through these stories. Many of them concern his love and care for children, how he fed  the hungry, healed the sick and cared for the oppressed. He saved three girls from a life of prostitution by providing them with dowries and so developed the tradition of bearing gifts to children on his feast day, a practice appropriated by the Christmas celebrations. Nicholas is also one of the patron saints of Russia.

Religious History During the 1200’s when gargoyles first appeared (and at many other times), the Roman Catholic Church was actively involved in converting people of other faiths to the Catholic, faith often very keenly indeed (as the Christian but non-Catholic Cathars could testify). The argument for decorated gargoyles runs as follows. Since literacy was generally not an option for most people, images were very important. Since the religious images (if any) that non-Christians were accustomed to were of animals or mixtures of animals and humans (e.g. the horned god, the Green Man), then putting similar images on churches and cathedrals would encourage non-Catholics to join the religion and go to church, or at least make them feel more comfortable about it, or at least ease the transition.

“Gargoyles (in the strict sense) are carvings on the outside of buildings designed to direct water from the roof away from the base of the walls… …Some gargoyles are undecorated but many are zoomorphic or anthropomorphic – often very imaginative and/or grotesque. This has led to the term ‘gargoyle’ being applied more widely to any grotesque carving in medieval buildings.” (from Bob Trubshaw, posting in BritArch archives, 23Feb1999)

In architecture, gargoyles (from the French gargouille, originally the throat or gullet, cf. Latin gurgulio, gula, and similar words derived from root gar, to swallow, the word representing the gurgling sound of water; Ital. doccione; Ger. Ausguss, Wasserspeier) are the carved terminations to spouts which convey water away from the sides of buildings.

Russell Sturgis, writing in Sturgis’ Illustrated Dictionary of Architecture and Building, defines a gargoyle as a: A water spout, … projecting from a gutter and intended to throw the water away from the walls and foundations. In medieval architecture, the gargoyles, which had to be very numerous because of the many gutters which were carried on the tops of flying buttresses, and higher and lower walls, were often very decorative, consisting, as they did, of stone images of grotesque animals, and the like, or, in smaller buildings of iron or lead. Many cultures throughout history have created sculptures of fantastic creatures. These figures stir our imaginations, as they stirred the imaginations of the carvers who lovingly created them. We struggle to understand and explain them, delving deep into the realms of psychology, culture, symbols, history and religion. One of the more common belief is that gargoyles served as protectors, keeping evil away from the buildings and their occupants. However, there seems to be much at work here and we can suspect that their reason to be, operates on a multitude of levels.

ABOUT THE ARCHITECT
Benjamin Ferrey (1810-1880) was born in Christchurch, Hampshire and educated at Wimborne Grammar School. He showed early skill in drawing, so his parents sent him to London to study architecture under Auguste Pugin. One of his fellow students was Pugin’s son, AW Pugin, who would become one of the most influential architects of the Victorian age. Ferrey established an architectural practice in Bloomsbury, London in 1834, and was one of the first architects to join the Royal Institute of British Architects (RIBA), which he twice served as Vice-President. He rose to become Diocesian Architect for Bath and Wells, and Secretary of Architects’ Committee for the Houses of Parliament. His ecclesiastical work included restoration at Wells Cathedral and Christchurch Priory, Church of St. Stephen, Westminster (1846), and Christ Church, Esher, Surrey (1853). Ferrey was one of the leading lights in the Norman and Gothic Revival movements that so characterise churches in the Victorian era.

Heritage of the church

A Grade II* listed building in Norman Revival style, designed in 1844 by Benjamin Ferrey. St Nicholas’ is very much a church in the continental European idiom, unusual to find in the Wiltshire countryside! It is said to have been modelled after a church at Thaon, Normandy.

At first glance it appears that St Nicholas church has been magically transported to the Wiltshire countryside from the European continent. It bears more than a passing resemblance to the ornate Italianate church at Wilton, near Salisbury, with a continental-style bell-tower set alongside the main body of the church, and Romanesque arcading decorating the west front. You enter the churchyard through a striking stone lych gate, in Italianate style, with a peculiar central circular window under the gable.

The interior of St Nicholas is spacious and airy, with arched clerestorey windows admitting shafts of bright light. While predominates – at least until you get to to the fabulously painted chancel, where the rounded apse has been brightly painted with stars on the ceiling and Victorian stencilled patterns on the walls. The stained glass is brightly coloured, as you would expect of a largely Victorian church.

It is hard to characterise St Nicholas church as historically important – but it is still a fascinating building, not least because it is a good example of the emerging style of Victorian Norman Revival.